On Saturday, May 13th, our wonderful intern Sabrina Ballard graduated from Northern Arizona University with a Bachelor’s degree in Civil Engineering. Not only did she succeed in completing her degree, but she excelled in her program, earning the award for Outstanding Student in the College of Engineering, Forestry and Natural Sciences. END_OF_DOCUMENT_TOKEN_TO_BE_REPLACED

A few weeks ago Hubbard Merrell attended the Ski Area Management (SAM) Summer Ops Camp as a Vendor. We had a small booth in the exhibit area and Micah Henderson spoke as part of a panel in a workshop about what you don’t know (that you probably need to know) about Aerial Adventure Courses. We appreciated the opportunity to talk with a bunch of people from the ski area industry.  Thanks to SAM for the invite and the chance to play outside! 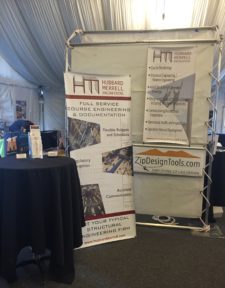 On September 9th 2016, HM structural engineering intern Sabrina Ballard participated in the AzASCE conference student competition at Desert Willow Conference Center in Phoenix, AZ. The competition required students to research an engineering topic and present the findings of the research to a panel of professional engineers at the conference. Sabrina won first place out of approximately 20 participants from all three state universities! Sabrina’s research was on the use of photogrammetry to assess the condition of existing structures and crack measurements in comparison to the methods traditionally used. She was inspired to research this topic because she had previously assisted a grad student with research on photogrammetry and really enjoyed it. Another contributing factor was that her research involved a lot of photography, which is a hobby of hers. Sabrina’s research took place over the course of one year and she decided to enter it in the competition because she really enjoys presenting. Also, as the president of the Northern Arizona University student chapter of ASCE, she wanted to inspire her peers to research topics interesting to them and enter the competition in the future.

Way to go Sabrina! We are glad to have you as part of our Hubbard Merrell team.

DEERFIELD, Illinois– The Association for Challenge Course Technology (ACCT) is pleased to announce that the ANSI/ACCT 03-2016 Challenge Course and Canopy/Zip Line Tour Standard received final approval January 11, 2016 from the ANSI Board of Standards Review. It is now an Approved American National Standard (ANS).

Founded in 1993, the ACCT is the world’s leading and largest American National Standards Institute (ANSI) Accredited Standards Developer focused specifically and solely on the challenge course industry (including aerial adventure parks, zip lines, canopy tours, team challenge courses, and climbing structures). ACCT was responsible for the development of the first industry standard, published in 1994. In 2006, ACCT became an ANSI Accredited Standards Developer and has since maintained that status. This designation indicates that ACCT has an accredited standards development process that is open, fair, and has allowed for equal representation of all material affected parties.

“I am amazed by how many people were a part of getting us to this milestone. I remember the original task group, set up by the Board of Directors at that time, being created to look into what it would take to start this process,” said Micah Henderson, ACCT Board of Directors Chair. “It is estimated that over 1,000 individuals were involved in the ANSI standards process over the past 10 years. There is no way to thank them all, but if you were one of them, know that your current Board of Directors is extremely grateful for your involvement.”

As the industry has grown and matured, many government bodies have chosen to establish or increase regulation for challenge courses, zip lines, and aerial adventure parks. The ACCT has always been a recognized leader, contributor, and voice in this process, and having the approval of ANSI for their standards development process is an additional endorsement, even beyond support from the international aerial adventure community.

“We are the largest group of professionals within this industry worldwide,” says Henderson. “We are proud that we have stayed committed to the process of consolidating the voices of hundreds of challenge course and zip line tour professionals. We know how important it is to hold ourselves to a widely recognized standard within our industry. It’s a task that we have never taken lightly, and one that fulfills the responsibility we have to participants and clients; the people who place their trust in us as an industry.”

The ANS will be available in PDF form, and it will be mobile-friendly. Members of the ACCT will receive their copies of the standard immediately on the release date, estimated to be before the 26th Annual International ACCT Conference and Expo to be held January 28-31, 2016 in Lost Pines, Texas. Non-members may purchase a copy of the ANS after the release date and can also get information on how to join the ACCT by visiting the ACCT website at www.acctinfo.org or by calling the ACCT office at 800.991.0286.

MORE ABOUT THE ACCT

How will standards impact the industry? Where are the best growth opportunities? We asked six experts to share their vision.

In the past year, aerial parks and zip lines have received great visibility and growing awareness, though a spate of incidents have challenged the notion that “all publicity is good publicity.” All this has generated a mix of optimism and caution, as the following comments reveal.

QUESTION 1: Adventure Park Insider: What is the greatest opportunity for the adventure park industry?

Valdo: It’s to invite kids and families to get out and enjoy physical challenges together in the great outdoors!

Ryan: The opportunity is to find a great location for an aerial course, that you can afford to build and operate, and enjoy running a business where you get to interact with happy clients every day.

Micah: I think the public would appreciate a consistent and easily recognizable quality assurance program for adventure parks to help them choose which parks they should attend. Right now it is difficult to know which parks are doing their due diligence to follow industry standards. Being able to offer that level of quality assurance would be a great opportunity for the customers, as well as the practitioners and operators. The ACCT is currently developing a program accreditation service to help meet this need. More information will be available at the upcoming ACCT conference.

Read the rest of the Q & A at AdventureParkInsider.com